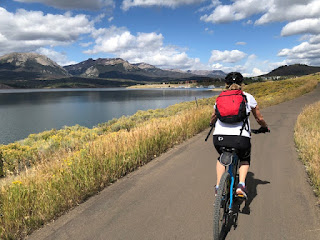 Recently, I was bicycling in the mountains of Colorado.  The very first part of the ride involved a long downhill and then another steep curvy hill.  I became concerned because I would be riding for several hours and I wasn't looking forward to the return ride back up these two hills at the end of the trip.  As I started to appreciate how absolutely beautiful the scenery was on this ride, my thought turned to a statement by the writer and Christian healer, Mary Baker Eddy.  In her book, Science and Health with Key to the Scriptures, she states:


"Consciousness constructs a better body when faith in matter has been conquered."

I began to challenge myself about what was in my consciousness.  Was I thinking that my body was getting older and thus not able to make this return climb?  Was I already concluding that I would be too tired to finish this ride?  What became clear to me was that my fear was based on my thinking that I had this material body that might not be up to the challenge.

As I became more inspired by the beauty around me, I started to think more deeply about another statement in Eddy's book:


"There is no life, truth, intelligence, nor substance in matter.  All is infinite Mind and its infinite manifestation, for God is All-in-all."

I felt invigorated by the idea that matter was not the substance of my being.  My consciousness became filled with the presence of God, good, not with fear or anxiousness.  What was totally surprising to me was how easily the end of the bicycle ride was.  In fact, I couldn't believe that I was at the top of the last hill because it had just been an enjoyable, easy climb!

You too can construct a better body by conquering faith in matter!  Read Science and Health with Key to the Scriptures online or purchase it at major book sellers.  You can also read, borrow or purchase the book at the Christian Science Reading Room in Evergreen, Colorado.